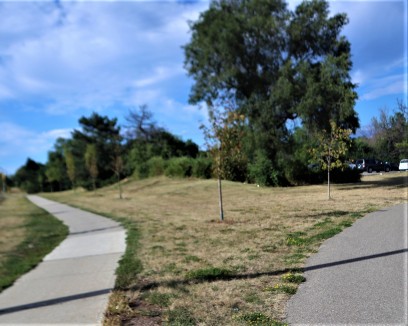 In the battle against climate change, we are not alone. We should remember that stabilization of the environment so life can continue to exist is always Mother Nature’s goal.

This is what British climate scientist James Lovelock meant when he presented his Gaia hypothesis to the world back in the ’70s. Through his charming thought experiment ‘Daisy World’, he demonstrated how he thinks Gaia, his name for Mother Nature (according to me) can adjust the atmosphere to suit life.

We often forget that the other half of Life, plants, are largely responsible for creating the atmosphere we live in. From algae to trees, plants produce the oxygen that keeps us alive, while they recycle water, taking it from the soil and releasing it back into the atmosphere through their leaves.

There are other things they do that we pay even less attention to.

Every living plant is a heat sink. When sunlight falls on a concrete or asphalt roadway, the road heats up. But when it falls on the leaves of an oak tree, or a green lawn, there is no increase in temperature. Instead, the tree and the grass take in the sun’s heat and with nutrients from the soil convert it into something that is not heat. This is photosynthesis.

But grass has limitations. Look at the picture above. The grass in this lawn has given up on photosynthesis for this year. Confronted by 2022 heat and drought, it has, in self-defence, gone into a dormant state. While it remains there, the soil beneath it heats up. Except under those little patches of green with the bright yellow flowers.

This is Birds-foot Trefoil. Another so-called invasive species, it was brought to North and South America from its home in Eurasia because it’s a nutritious forage for cattle, because it can handle wet poorly drained soils as well as dry soils, and because it has good resistance to insects and diseases. Being a legume, it enhances soils by fixing nitrogen in them. As you might expect from such a talented plant, it escaped and has been spreading through North and South America for decades.

I’m not sure when it arrived in Ontario, Canada where I live, but I wasn’t aware of it when I was a boy in the 1950s, nor later in the ’60s. I first began to pay attention to it when it began to spread with abandon along the sides of highways in the 1980s, probably because it also tolerates salt. It’s always noticeable since its brilliant flowers continue from July to September, even during droughts, which makes them welcome to all species of bees. I used to think they were too small for honeybees and bumblebees, but this year, during our current drought, I have seen both feeding happily on birdsfoot. 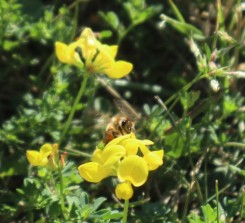 Birdsfoot does well in lawns too, because it tolerates mowing and foot-traffic.

So as they expand their presence on the land, storing carbon in their roots year after year, protecting the soil beneath them even on the hottest days, keep in mind that these little troopers of Mother Nature are plugging away in resistance to global warming every day.

Because I recognized the importance of this little plant years ago, I’ve been collecting its seed for some time, and distributing it in places where it looks needed. Look at these seed pods, along with some seed from an opened one, and you’ll see where it gets its name from.

If you would like to do this, but you’re not able to find birdsfoot, or you simply don’t have the time, their cousin white clover (for sale at any garden store) can be used as a substitute. Also welcomed by animals and bees, and also a perennial (red clover isn’t) white clover is not so drought tolerant as birdsfoot, but it holds on much longer than the grasses.

Yes, the purists who want perfect lawns sneer at clover too, but it too fixes nitrogen and any lawn benefits from it, as does planet Earth.

Of course, these little soldiers aren’t alone in Mother Nature’s armies. Tree lines throughout the world are reported to be moving north or south in the northern and southern hemispheres respectively, and moving up the sides of many mountains.

In my novel Skol, seventeen year-old Simon arrives alone on planet Earth in the 23rd century, the first planet he has ever been allowed to set foot on, where he finds its wildernesses fully restored, almost all humans gone, banned to other planets. If we ever get our emissions under control, plants might restore the planet faster than we think, in time for Simon.