What will the future hold for shy people? Not necessarily what you think. 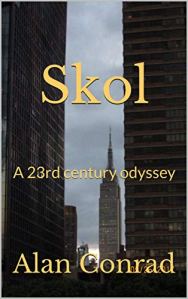 On a lone backpacking trip in the 1980s, as I wandered through wild forests and lakes, I conceived the story of shy seventeen-year-old Simon, a boy in the 23rd century who has never seen a forest or a lake because he has lived his entire life on a space freighter.

Simon is a member of the Skolen, the only people capable of piloting interstellar ships, due to their solitary nature  (self-piloting sentient ships have been banned, due to their penchant for disappearing on their own enigmatic quests).

Why the first planet Simon is allowed to land on is wilderness Earth, whose cities have been abandoned, I won’t go into here. But what happens to Simon in six months there you won’t easily forget.

Shyness in the 23rd century is still unwelcome, yet it can still be rewarding too.

The book is available at Amazon or anywhere else. You can read the first 6 chapters free here: