The Shyness Guide is not just a different look at shyness, introversion, autism, social anxiety, etc. – it’s a diffe 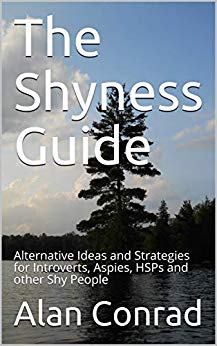 rent way of seeing the world.

When I talk about being more shy so you can be less shy, I’m not just playing with words. I’m referring to something real.

If you read the book, you may wonder why I think I have a right to disagree with psychologists and psychiatrists.

Well, for one thing, when you’ve worked in the personal injury business for over forty years and you’ve read thousands of psychological and psychiatric reports attempting to explain the complex mental problems of injured people, you learn a few things.

Besides that, I also investigated accidents, thousands of them, trying to unravel the tangled evidence of drivers, victims and witnesses. Separating the truth from the lies and the astonishing misperceptions of people is no easy matter. Accident investigators are detectives, and detectives, as Sherlock Holmes demonstrated, have to be psychologists.

But my training goes farther back than that.

Born acutely shy into a family of natural loners, I grew up in a bewildering 1950s social world. Bewildering because, despite some good intentions, its social mindset was irredeemably tied to hypocrisy and deceit. Though my father, a sceptic of it all, died when I was only 5 years old, I followed in his footsteps, a little sceptic from the word go.

By the time I finished high school I was reading Freud, Jung, Ronald Laing, James Hillman and other psychiatrists and psychologists. Though some of them, Freud and Laing for example, are usually considered to be discredited now, if you read them they’re still strong voices. They don’t accept their demotion.

There are psychologists outside the medical/healthcare field. Religion, shamanism, philosophy, astrology, and the paranormal perception and thinking of mediums are all schools of psychology with much to say. I learned there too.

Literature is a deep sea of psychological understanding. From Shakespeare and Cervantes to the authors of today, writers have often demonstrated a psychological wisdom that goes beyond mainstream psychology.

Those writers and thinkers have been with me all my life, watching over my shoulder, offering their advice. They helped me write my two novels and they helped me with The Shyness Guide. So this book is not just my take on shyness, introversion, social anxiety and autism. If you read it, you’re going to hear from all those people, not just me.

That’s why it’s no problem for me to disagree with doctors.

That’s why The Shyness Guide is not like other books. If you’re shy and you read it, your understanding of shyness, and the world, and maybe yourself, is going to change.

The book is available on any Amazon site as a paperback and an ebook. Here are links to Amazon.com, and Amazon in the UK:

The previous edition of The Shyness Guide, has a black and gold cover. If you see it for sale (which should be a ‘used’ copy), it has only half the content of the new book.

For those who aren’t ready to buy it, I’ve made up a free PDF version with 77 pages excerpted from the new book (which has 289 pages). This is more than the usual sampling that you get, and I’ve included the titles of everything that has been removed so you can have a better idea of what is in the full book. The Table of Contents was removed too.