Rescuing Nature, then trashing her again

When Toronto was renovating its waterfront a few years ago, someone got the idea that a small wetland might be created at the foot of Spadina Avenue. Apparently large pike from Lake Ontario were known to be congregating there every spring, looking for a place where they used to spawn.

To the city’s credit, this got done, supplying not only a little water for the pike, but a little natural corner that would encourage birds, frogs, turtles maybe, and insects. Though it is less than an acre in size, there is a little of everything. The plaque set up to explain this to passing visitors includes this explanation:

The Spadina Quay Wetland has been designed to respond to the fluctuating water level regime of Lake Ontario and provide a variety of grasses, bulrushes and rushes within seasonally flooded areas to accommodate pike spawning. The intent of the wetland is to enhance the health and integrity of the resident fish and wildlife communities in Toronto Bay.

Following the spring rains last year, 2017, I went down at the beginning of May to see how their health and integrity were doing. Well, there was plenty of water, but, sad to say, it was littered with the trash you see floating in the photos.

Why is the garbage there? The nearby streets are clean, so someone is cleaning them. Why is the little wetland excluded?

But trash can be picked up by anyone. In the space of 5-10 minutes I picked up the garbage you see here, cleaning up one small corner. 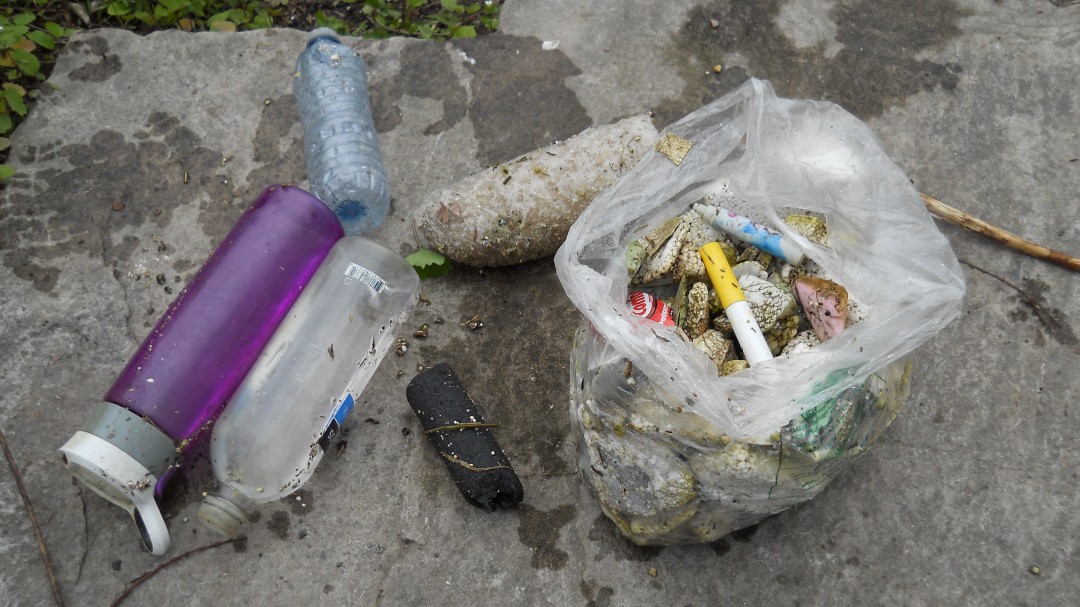 Just outside the entrance to this wetland you can see the yachts and sailboats lined up. There’s no shortage of money around here.

Does no one really care about the little pike habitat? If each person who passed by picked up only one item and dropped it in the waste and/or recycling bins on the site, that mess wouldn’t be there. Maybe the pike would be there (I saw none).

Toronto, of course, is not the only place where this is an issue. But in New York City, where you can see similar projects all along the East River, they seem to be winning the trash war. And along the shores of Jamaica Bay, a giant natural salt marsh/wildlife refuge with many islands just south of Brooklyn and Queens, I found the massive collections of trash that have been there for several years all gone when I visited the place this March.

I’ll be going back to Spadina Quay in the next couple of weeks to see whether it has had the same rescue, or if it  continues in this sad state.